That One Time I Took A Cab With A Stranger

As the title suggests, yes, I did took a cab on my way home with a stranger.
I was heading home from a night out with my friends, Approximately around 1 am.
And to tell you, I don't feel safe here in my country anymore and yes I'm a bit paranoid. I become aware of my surroundings more than I should especially when commuting, I make sure everyone in the jeepney looks decent and not suspicious. I always hug my bag tightly. I'm at that point.

I experienced sitting beside this guy in the jeep, probably around his teens, he was one by one asking us for money.  No one paid attention to him so he started shouting and threatening us. It was scary!!!
I was thinking that what if he had some weapons and went ballistic! Given the fact that I was just beside him, and I got all my important things in my bag T^T Good thing I got off that jeep and made my little escape, I was shaking when I reached home.
and that's probably one out of the many horrendous jeepney experinces that I've ever had.

So back to my story, a friend of mine, Vien send me off at the jeepney terminal going to SM San Lazaro coz I'm just a few blocks away from it. It was dark and no sightings of jeepneys. I was starting to feel nervous because some pedicab drivers were catcalling me. Then this girl who I presumed was having the same trouble, asked me where I lived. I answered her and she just nodded.
After a couple seconds she once again, came to me and  asked if we can take a cab since we have the same route. I was a bit hesitant at first but before I knew it, she pulled over a cab and went inside.
So leaving with no choice and really wanting to go home too, I hopped in the cab.

Inside the cab, we started the introductions. She is Sienna Balderas and currently a college student.
We also agreed to share for the cab fare. The conversation went well, it was never awkward. I bet the taxi driver was confused hearing our conversations and introductions hahaha ! We exchanged numbers and facebook too. I still have a lot of things to say and she was so fun to be with that I lost track of time,

and I hurriedly took this photo coz I was about to go. 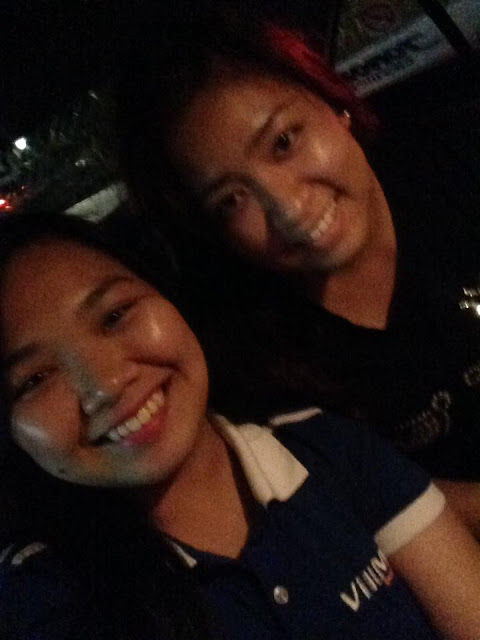 Thank you Sienna !
and it was nice meeting you.

It was fast yet it made me feel ..so what's the term ? hmm alive ?
Yes, coz, I don't trust people that easily especially strangers coz you don't know their motives
But she is an exception.
She was just a girl who's eager to go home like me.
and look, I also found a new friend.
This was all unexpected.
This is not something you will experience everyday.
I'm glad I did..

And she didn't accept my cab fare share even though we agreed to it.
She insisted TTuTT